Pag cheeseExcellent delicacy from island Pag, the best cheese in the world. 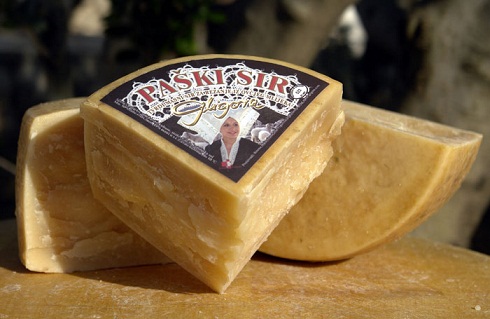 In 1774, the travel writer Alberto Fortis, on his way to Dalmatia, wrote about Pag's products of sea salt, sage honey, wool and Pag cheese. Until early in the 20th century, the inhabitants of Pag had their own dry stone huts in which they milked the sheep and made Pag cheese. These stone houses are adorned in sedge and reeds from the nearby fields, the huts were built out of town on the rocky hills above the pastures. The majority of the pastures are located on the hilly parts of the island and are recognizable in that they are surrounded by dry stone walls. From far off, the intricate stone walls resemble the famous Pag Lace (Paska Chipka) as they traverse the rocky summits. Historically, there was no private ownership of the pastures and the sheep freely grazed on all the land. The shepherds kept watch of the sheep and in the stone huts milked them and made Pag cheese. In time, the pastures were slowly becoming privately owned, so the Shepherds moved back into the towns and their stone huts became pastoral homes. As the Shepherds commuted to and from the pastures to care for the sheep, the women assumed the role of cheese makers. Pag cheese slowly but surely gained importance not only as a food for the locals but also as a commodity to market across Croatia, thus Pag cheese became an important source of income for the villagers.

The island of Pag has a long tradition of cheese making and agriculture and is the most indented island in the Adriatic, which provides perfect conditions for making cheese. The island of Pag's eastern landscape is dominated by the mountain range on the mainland, Velebit. It is on these snowy peaks that hot and cold air amasses, and particularly in winter, gives birth to the Pag Bora. A strong, cool, dry wind that gathers strength as it tumbles down the southern slopes of Velebit onto the calm seas. The Bora then dries and turns into dry salt dust, which it then scatters all over Pag, turning it into a white, salty island. The salt dust becomes wet when it falls onto the vegetation, as if it was thrown upon it as boiling water, and in these conditions upon the rocky hills of Pag, only the extremely resilient and aromatic plant species survive. The best known and most precious is the fragrant Pag's sage, there are numerous colonies of this purple flowered plant which adorn the pure white limestone in May, and fill the air with its scent. It is upon such salty and aromatic vegetation that Pag's autochthonous breed of sheep graze freely. Giving Pag sheeps unique qualities and tastes in their milk which permeate the taste of Pag cheese.

Pag cheese is a hard, tasty sheep cheese from croatian island of Pag. This cheese is considered as the best cheese in Croatia and it can be found in many other countries who had imported it.